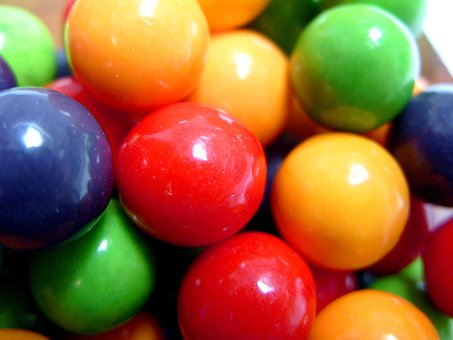 Jawbreakers. The candy industry’s legacy to the dental profession. There probably is not another candy anywhere that has the exceptional hardness of a jawbreaker or possibly as large of a sugar content.

Enough said. On to discover the unmitigated joy (and sense of frustration) that includes the jawbreaker experience.

Sugar wasn’t available in Egypt; the first written document about its availability was found around 500 CE, in India. Originally, sugar was thought of as a spice and until the 15th century, has been used only medicinally, doled out in minuscule doses, due to its extreme rarity. By the 16th century, due to wide-ranging sugar farming and improved refining procedures, sugar was no longer thought of as such a rare commodity. At this time, primitive candy were being made in Europe, but by the end of the 18th century, candy-making machines was producing more intricate candies in much larger amounts.

When sugar is cooked at a high temperature, it becomes totally crystalized and becomes hard candy. From the middle of the 18th century, there were nearly 400 candy factories producing penny candies in the United States.

The jawbreaker rose to prominence because of the efforts of the Ferrari Pan Candy Company in Forest Park, Illinois. Ferrari Pan currently specializes in the creation of its original Jaw Breakers, as well as Boston Baked Beans and Red Hots. Although there are many manufacturers of jawbreakers now in the 21st century, such as Nestlé’s Willy Wonka Candy Company and the Scones Chocolate Organization, Ferrari Pan is still the most prolific manufacturer of pan candies throughout the world.

Jawbreakers, also referred to as gob stoppers (in the British slang: gob for the mouth and stopper as in to block an opening), belong to a category of hard candy where every candy, usually round, ranges in size from a tiny 1/4″ ball to a massive 3-3/8″. The surface, as well as the inside, of a jawbreaker is incredibly hard and not intended for anybody with a sensitive mouth.

Let’s get down to the nitty-gritty of the hot pan procedure for candy making. A jawbreaker consists of sugar, sugar, and more sugar. It takes 14 to 19 days to create one jawbreaker, from one grain of sugar to the finished product. A batch of jawbreakers tumbles constantly in enormous spherical copper kettles over a gas fire. The kettles or pans all have a broad mouth or opening.

Pouring the sugar A panner (the employee who uses the pans or kettles to make candy) pours granulated sugar into a pan as a gas flame preheats the pan. Each grain of sugar will become a jawbreaker since the crystallization process proceeds; other grains crystallize around it in a round pattern. The panner ladles hot liquid sugar into the pan along its edges. The jawbreakers begin to increase in size as the liquid sugar attaches itself to the sugar grains. In a seemingly endless endeavor, the panner continues to add extra liquid sugar to the pans at intervals over a time span of 14 to 19 days, with the kettle rotating . It is possible for liquid sugar to be added to the pan over 100 days in that 14 to 19 days. Either the panner or another employee creatively examines, at times, the jawbreakers to ensure there are no abnormalities in the shape of the candy.
Adding other components Only the outer layers of most kinds of jawbreakers have coloring. Only when the jawbreakers have attained almost their completed, target size does the panner add the predetermined color and flavorings to the edge of the pan. As the pot continues to rotate, all the jawbreakers get equally”dressed” with color and taste.
Polishing When the jawbreakers have reached their optimal size, after about two weeks, they transfer from the hot pan into a polishing pan. Hot pans and polishing pans seem very much alike. At this time, the jawbreakers are set to rotate in their polishing pan. Another panner adds food-grade wax to the pan so that every candy becomes polished as the pan . Once polished, the jawbreakers are completed and ready to be packed.
Measuring The final jawbreakers are loaded on a tilted ramp where the candy colors can be equally mixed. Small batches of this jawbreakers roll down the ramp and fall to a central chute. The jawbreakers continue their journey by falling into trays arranged on spiral arms of the central chute. Each tray holds only a predetermined weight of the jawbreakers (i.e. 80 ounce or 5 lb.) When that weight is attained, the tray swings out of the way so that the next tray may load. When the top trays reach their weight load, then the bottom trays drop their jawbreakers to the bagging machine.
Bagging A large machine holding a broad spool of thin plastic on a revolving drum is used to mechanically bag the jawbreakers. The filled bags are now in the final stage of production. All that is left to do is to put these completed bags into packing boxes and away to market they move.
Word of warning: Jawbreakers are meant to be sucked upon, not bitten into, unless you fancy the broken tooth look.

A jawbreaker can be as large as a golf ball or as little as a candy sprinkle.
When a jawbreaker is broken open, you will see dozens upon dozens of sugar levels that look like the concentric rings of an old tree viewed in cross-section.
A jawbreaker is not created for the anxious person who is always in a rush. It can take hours to satisfactorily consume a jawbreaker. Remember: suck, lick, whatever but do not attempt to bite through the layers. Jawbreakers are made of crystallized sugar which, at times, can be considered the same tooth-shattering hardness as concrete. Do be careful, please.
There have been at least two reported events in which a jawbreaker has exploded spontaneously, leaving its customer with severe burns requiring hospitalization. 1 explosion involved a 9-year-old girl from Florida. She had abandoned her jawbreaker sitting in direct sunlight and when she took her first lick, the jawbreaker exploded in her face, leaving her with severe burns on many areas of her body. The other explosion took place on the site of the Discovery Channel’s television program MythBusters when a microwave oven has been used to exemplify it can cause different layers compressed within a jawbreaker to heat at differing rates and so exploding the jawbreaker, causing a massive spray of hot candy to splatter in a wide area. MythBusters sponsor Adam Savage and another crew member were treated for light burns.
Happy licking!